There are a number of sources of information about the airfield and its history:

The decommissioned airfield was released for civilian use in 1960.   It has been used for model aircraft flying continuously since then.

Imagine standing here during the second World War; the roar of a Liberator aircraft taking off on a mission to track down enemy submarines and the buzz of hundreds of people living training and flying here. 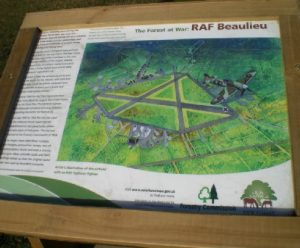 The commemoration sign describing the wartime role of the Aerodrome.

Across the south of England many airfields were built for the war effort.  The New Forest was important with 12 airfields in the area. Beaulieu was one of the largest, playing several roles including a coastal command centre, A D-Day fighter base and an early helicopter experiment site.

Opened in 1942 the airfield played its part in the Battle for the Atlantic with both RAF and later Czech squadrons stationed here. Missions left to search out U-boats and protect vital supply convoys.

In early 1944 the RAF flew Typhoons from here; from March to August the United States Army Air Force flew Thunderbolt fighters and Marauder bombers including missions supporting the battle for Normandy.

From late 1944 to 1950 the site was used by the Airborne Forces Experimental Establishment to test parachutes, gliders and early types of helicopter.  The site was returned to the Forestry Commission in 1959.

At its height there were three runways, two hangars, ammunition dumps, tens of accommodation blocks and even a cinema and a gym.  Many concrete road and hard standings remain as does the original water tower now used by Roundhill Campsite.

The commemoration sign describing the wartime role of the Aerodrome.

Iconic One Theme | Powered by Wordpress